Frenchie ears can go up and down for the first few months. They aren’t born with upright and bat-like ears that Frenchies are renowned for.

When French bulldogs are born, their ears are usually soft and floppy. When the cartilage starts to form and harden, Frenchies will get the signature erect ears. Frenchie ears are also described as tulip ears!

Why Do French Bulldogs Have Floppy Ears?

As French bulldogs’ ears start to come through, it means calcium is being heavily concentrated. This high concentration of calcium leads to softer ears. As the cartilage grows strong enough, the ears stand up and become erect.

Can French Bulldog Have One Floppy Ear?

A Frenchie with one floppy ear and one erect one will look cute and comical, but during the teething period, it’s not something to get too concerned about.

It’s all part of the up and down dance that the ear cartilage and muscle will do during this phase of your puppy’s development.

Don’t be concerned if you do see this; it’s not unusual and means that the ear muscles and cartilage are developing as they should – some puppies will have this, others won’t.

When Should You Be Worried About French Bulldog Floppy Ears?

Well, if your Frenchie still has one floppy ear or both floppy at the age of 8 months, then it’s unlikely that they will ever naturally perk up into the erect position.

Assuming you have spoken to the breeder and ruled out any hereditary ear floppiness, you should talk with your vet.

There are many different ear types in dogs. These ear-type descriptions will allow you to label and identify the shape of your dog’s ears.

Erect ears, also known as a prick or upright ears, are very common in dogs. They are usually sharp, pointed, and stand erect. These upright ears stand stiffly and can have either rounded or pointed tips.

Drop ears or lop ears hang down from the place where they are attached to the head. Many pet enthusiasts also refer to these as pendant ears.

Drop ears can be of a variety of different sizes and shapes. Some of these are fully dropped to a pendant or pendulous ones. Dog breeds with drop ears include Basset hounds as a classic example.

Ears that are upright and large in proportion to the size of the head are called bat ears. The V-shaped space between the ears causes them to be inclined outward extending beyond the sides of the face.

The bat ears are not only upright, but they’re also in proportion to the head size. These ears are named after bats as bats are commonly known for having big ears.

According to AKC, the French Bulldogs have bat ears. Other dogs with bat ears include Chihuahuas, Cardigan Welsh Corgis.

Rose ears are erect at the base and folded slightly back. The rose style is a small, drop version of button ears that folds a bit backward. The name is derived from the ear’s shape as the folds resemble the petals of the rose. Dogs with rose ears include Whippets, Bulldogs, and Greyhounds.

Cocked ears belong to dogs whose ears are neither fully erect nor clearly pendant. They are also known as semi-pricked, semi-crop, or tipped ears.

The main feature of cocked ears is that the erect ears are bent just slightly forward enough to fold over at the tip. Dogs with semi-pricked ears are Border Collies, Rough Collies, Shetland Sheepdogs, and Pit Bulls.

Button ears also called hooded ears, are ones that start to stick up but then fold over toward the front about halfway up. Dogs with button ears have the front flap of the semi-erect lobes fold forward to hide the ear canal opening.

Candle-flame ears are curved slightly inward at their base with a slight pinch on the outside edge. It gives the lighter inner ear color the shape of a candle flame. The shape of the ear tapers off near the top in a pointy shape like a candle flame.

Candle-flame ears are commonly found on breeds such as the English Toy Terrier, Toy Fox Terrier, the Manchester, and the miniature pitcher.

Gilbert’s ears are shaped like a leaf of the hazelnut or Filbert tree. The name comes from its shape, which is similar to hazelnut or a filbert nut.

The only examples of dogs with Filbert Shaped Ear include Bedlington Terrier. You might never have heard Filbert ears in any other breed besides the Bedlington.

The folded ears, or lobe-shaped ears, are pendant-shaped ears that hang down in the folds. They poke a bit out at the top and do not lie flat.

Dogs with folded ears include spaniel breeds like cavaliers and Field Spaniels.

The French Bulldogs with ear problems show the following symptoms:

Factors that may lead to itching due to ear infections are:

Keeping our dogs’ ears clean is an important part of their grooming and care. A healthy and clean dog ear looks pink, odorless, and not dirty or inflamed. You can take the following steps to maintain your French Bulldog’s ear health:

Avoid cotton-tipped swabs and anything with a pointed tip. This may lead to trauma to the inner structures of the ear itself.

With a few efforts and lifestyle changes, you can manage your dog’s ear problems and live happily with your furry pal. 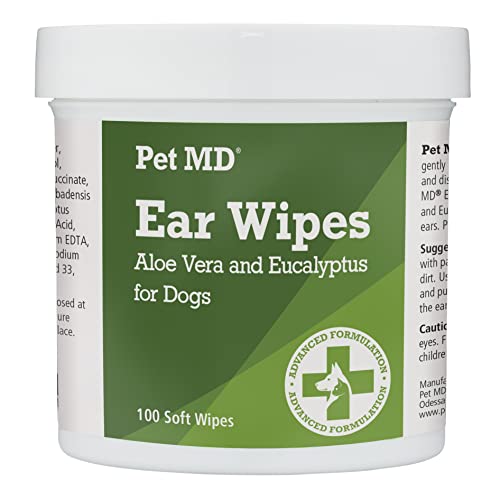 The bottom line on Frenchies with floppy ears: French Bulldogs can have floppy ears and some of them can even have just one floppy ear. This does not mean that there is anything wrong with their overall health and fitness. It just adds to their cuteness!

Remember that dog ears are there for a reason. It’s best to leave them natural and beautiful just the way they are.

You can keep your dog’s ears healthy by regular cleaning and a healthy diet. If your dog is showing any symptoms of an ear problem, seek treatment to ensure the issue does not become severe.

Did you find this article useful? Feel free to share your thoughts. We would be happy to hear from you!